Dolphins in the Galapagos! 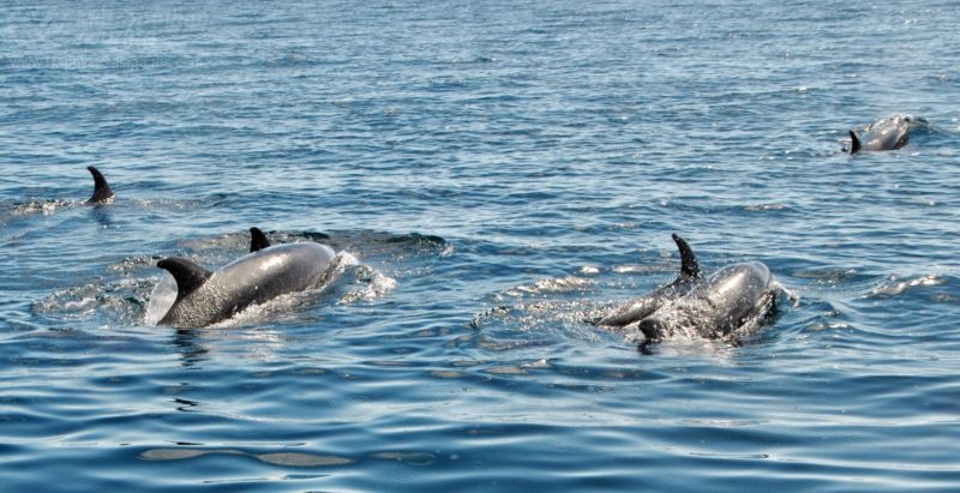 Supremely playful in their demeanor and aquatic way of life, dolphins in the Galapagos tend to dazzle lucky visitors with their whimsical and curious dance. These fascinating creatures are incredibly friendly and have their own way of making the animal kingdom seem a little less foreign to us relatively “self-interested” mammals. They openly show signs of solidarity amongst themselves and even other creatures, they marvel at their own reflection if there’s a mirror right in front of them, they even have sophisticated mechanisms that allow them to use echolocation to identify their surroundings. And the best part? These animals aren’t strangers to the Galapagos. 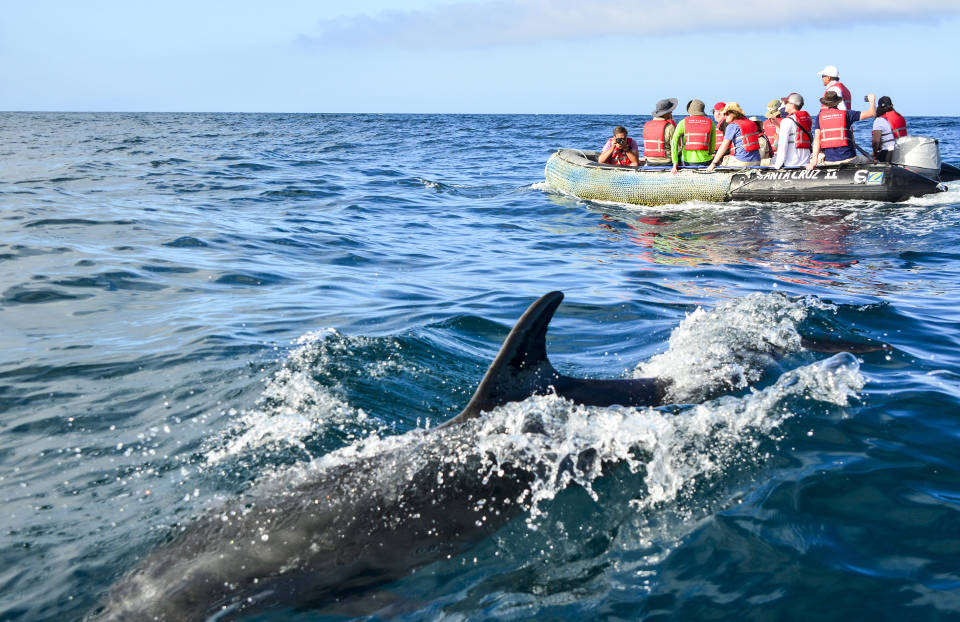 An encounter with dolphins in Galapagos will always be a unique moment!

What species of dolphins can we see in the Galapagos?

General Facts About This Beautiful Species

Dolphins are aquatic mammals that belong to a paraphyletic group of the cetacean order. Paraphyletic means it comes from the order’s last common ancestor. Most dolphin species can live up to 25 years, and some Bottle Nosed species have been known to live up to 50 years. They range greatly in size, from the Maui dolphin measuring up to 1.7 m (5.6 ft) and weighing 50kg (110 lb), to the famous killer whale – also a member of the dolphin family – measuring up to 9.5 m (31ft) and weighing as much as 10 tons. Even though most dolphin species prefer warm tropical waters, some, like the Right Whale dolphin prefers colder climates. Male dolphins mate with several females every year, while females mate every two to three years. Once the female dolphin gives birth, usually during summer or spring, they are the sole careers of their calves. 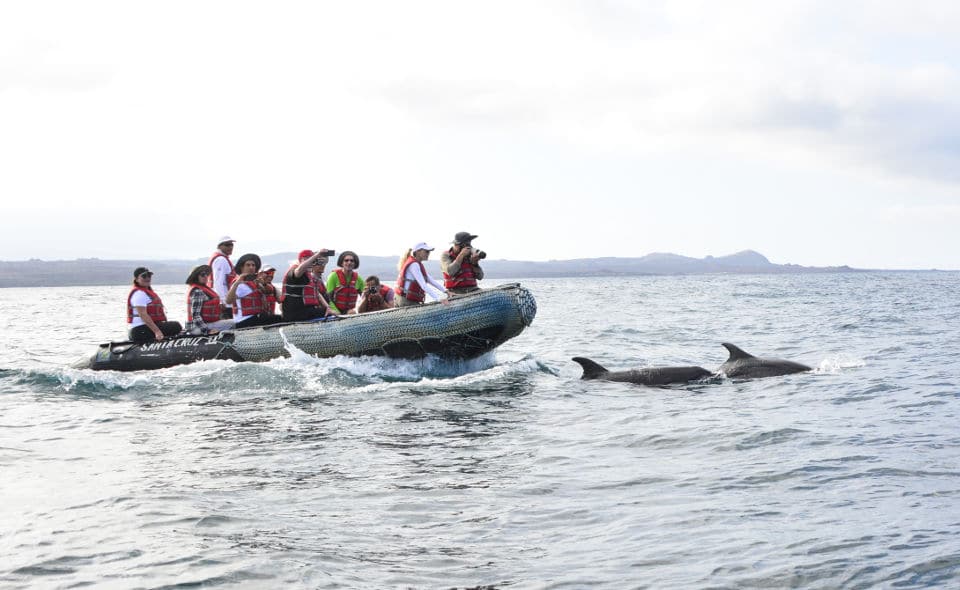 Our guests getting beautiful shots of some dolphins around Bartolome Island!

The dolphin’s main source of food consists mostly of fish and squid, though its larger cousin, orca wheels feed on large mammals, like seals. Dolphins can eat up to 33 lb of fish a day. Unlike other marine creatures, dolphins don’t breathe through gills, rather through a blowhole on their backs that works just like a nose.  Because dolphins have lungs they need air to survive and have to go out to the surface for oxygen every 15 minutes at the most, if they go for very deep dives. In fact, breathing is not an automatic function for them, and – given the fact that only one half of their brain sleeps while the other remains awake – they must “sleep” at the surface to allow their blowholes to continue breathing.

Also called tursiops truncatus, is often seen swimming and jumping playfully along with visitors’ boats and other small motored-vessels.  They have adapted to the cooler water of the islands by having an extra layer of fat, called blubber, in their bodies to keep them warm. Their color fades from a blueish-grey at the top to a light grey or white at the bottom. Their torpedo-like shape enables them to swim at high speeds, reaching velocities of 48.3 km (30 mi) per hour.  They are also known to be very acrobatic in their movements, oftentimes becoming a spectacle to all visitors that are fortunate enough to come upon during their travels.

Or delphinus delphis, by its scientific name, ironically – it’s less common to see than their Bottle Nose cousins. The easiest way to distinguish them is by spotting the dark stripe that runs from their flipper to their chin. Additionally, the Common dolphin is of a uniform color (as opposed to the two-toned Bottle Nose dolphin). The two species of Common dolphin in the Galapagos consist of the long-beaked and short-beaked variety. They are highly versatile and tend to jump and splash around together in large numbers that can range anywhere between a few dozen to a hundred individuals.

These remarkable creatures remain one of the most rewarding spectacles you can be treated to while on your expedition vessel in the Galapagos. Peer over the side of the boat on our the Galapagos as we’re moving along, and who knows? They might be there, swimming alongside us, maybe even wondering what we are the same way we marvel at their ways.