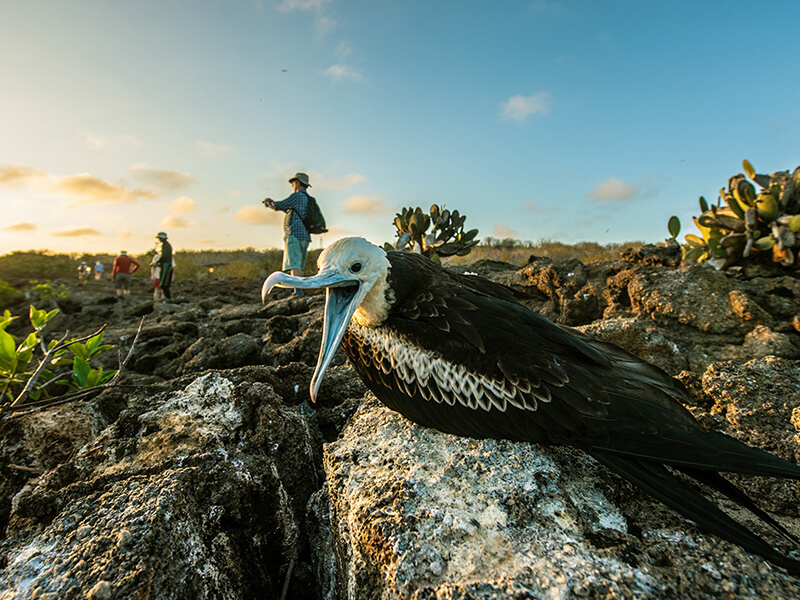 Hiking Genovesa Island in Galapagos – one of the Northern Islands

The Galapagos Islands is best experienced on foot because of the many hiking trails. Genovesa Island in Galapagos, however, is the only of the northern location with hiking trails, and it is here where birdlife rocks. Trails lead visitors to habitats of extraordinary wildlife, great vistas of a collapsed caldera, and some of the most rewarding snorkeling in the islands.

Hiking the densest bird colony in Galapagos – a Birdwatcher’s Dream 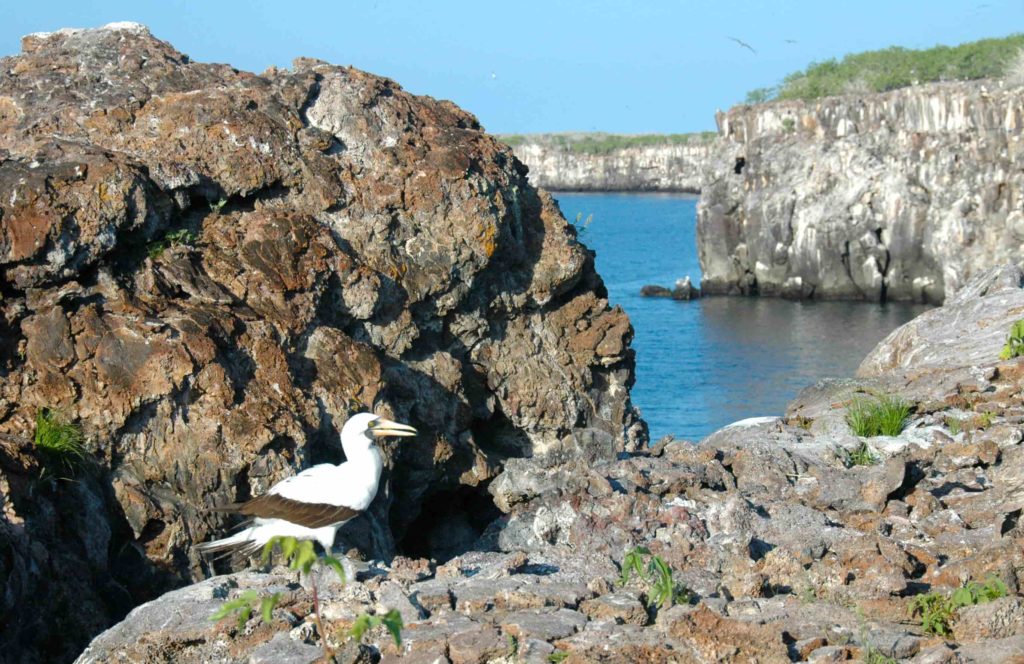 If you’ve been at Times Square NYC on a Friday night, then you know the meaning of human density. Now, think of an island with only two trails for hiking in the densest bird colony of the Galapagos. You have just arrived in Genovesa (Tower) Island. One of the most tangible benefits of being on an expedition cruise is that you can travel to far out places in the archipelago. That is how we are able to witness a place like Genovesa. Not only you will be the only visitors at that time, but you will also have the company of a knowledgeable, trained Naturalist who will make sure you do not miss a thing. The Galapagos Islands is a national park of Ecuador, and the local authority carefully monitors tourism to protect the flora and fauna as well as to give visitors a chance to see the islands as Charles Darwin did in 1835.

Genovesa Island in Galapagos, formerly called Tower Island, was named after the Italian city of Genoa, the birthplace of Christopher Columbus. This pancake-like island is actually the summit of a submerged volcano and Darwin Bay is the flooded caldera. Another name for Genovesa is The Bird Island and with good reason (more creative writers even call it Hitchcock’s Island-guess why?). When you hike its only two trails, you will literally see hundreds of birds, but you are probably listening to thousands of birds, and some of them are mating here…a show reserved for the few explorers that get this far North.

The Birds of Genovesa Island in Galapagos 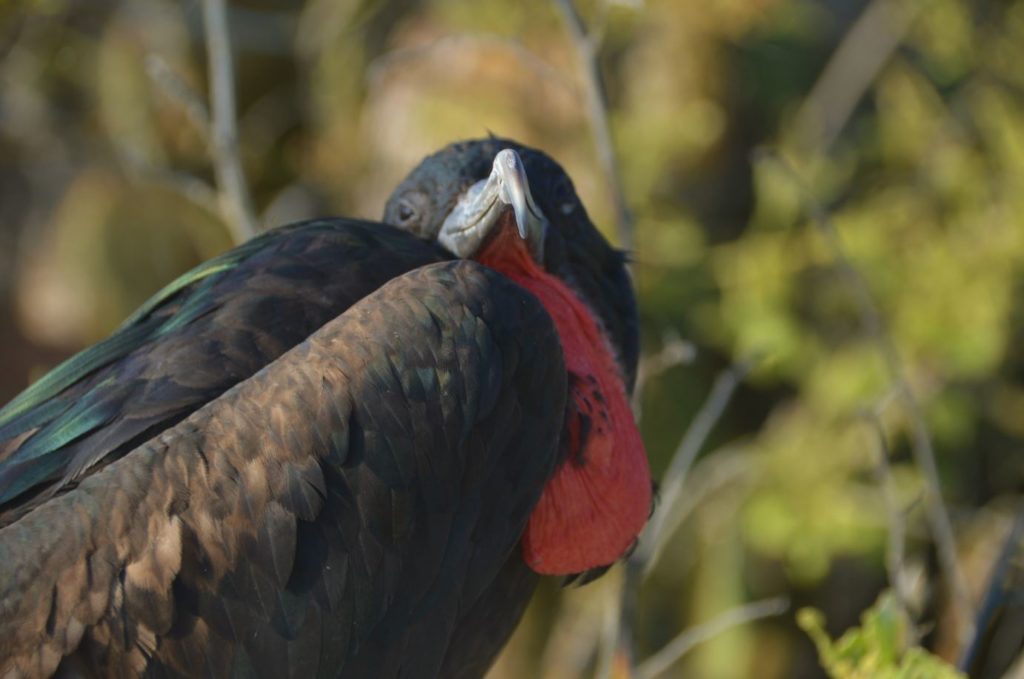 You can find magnificent frigatebirds in Genovesa Island

Red-footed boobies only lay one egg every 15 months, so it is extraordinary to see the nesting colony on Genovesa Island in Galapagos. It is the largest nesting colony in the islands. Their bright red, webbed feet, turquoise bill, and sleek, light-brown feathers make them fun to watch. They live year-round on the island and nest on coastal shrubs and trees. Although they are the smallest of the booby species, they are strong flyers, traveling up to 150 kilometers to look for food in the sea. Their aerodynamic bodies are adapted for diving, and their nostrils are closeable. After they have spotted a fish from the air or phosphorescent schools of squid at night with their keen eyesight, they dive into the water and swim with their powerful webbed feet. Sometimes, they hunt in groups.

Great frigatebirds are huge with an impressive wingspan of up to 7 feet across. They glide over the ocean grabbing their food from the waves. Even though they spend most of their life over the water, they cannot swim. Hiking along Darwin Bay will bring you close to frigate birds nesting. Frigate birds may look splendid soaring over the ocean, but on land, they are quite clumsy and odd-looking. When it is perched in the branches of a leafless tree, it looks more like an oversized crow. Males develop a large red sack (called, gular pouch) which gets puffed up as a means of attracting females during their mating season. When hundreds of them show this display at the unison, it is a real show.

Prince Phillip’s Steps are rock steps carved directly out of the volcanic rock cliffs and with a handrail to climb up. They go up 25 meters to the largest bird colonies on the Galapagos. You can see so many storm petrels take off and land here during their hunt for food. Storm Petrels are small seabirds that are fascinating to watch as they feed. They hover over the waves almost like a helicopter and pluck their meal from the planktonic crustaceans and small fish on the surface. When they fly, they flutter almost like a bat. This location is also where its main predator thrives: the short-eared owl. Since there are no Galapagos hawks on this island, owls have somewhat taken the diurnal duties of hunting and are considered to be both crepuscular and nocturnal predators.

Nazca boobies also nest at Prince Phillip’s Steps. They are the largest of the booby species and sometimes feed 3 to 15 kilometers offshore. For the past five years, they have been raising more young, which may mean they have modified their diet to include a larger variety of fish. Hearing their whistling and nasal honks is a true show. Other birds are here too; perhaps, Darwin’s finches deserve a special category as the large-beaked ground finch shows its powerful beak (almost like a parrot) as an adaptation for cracking hard seeds. Herons, mockingbirds, yellow warblers, red-billed tropicbirds, pelicans, and regular migrants are found here too. 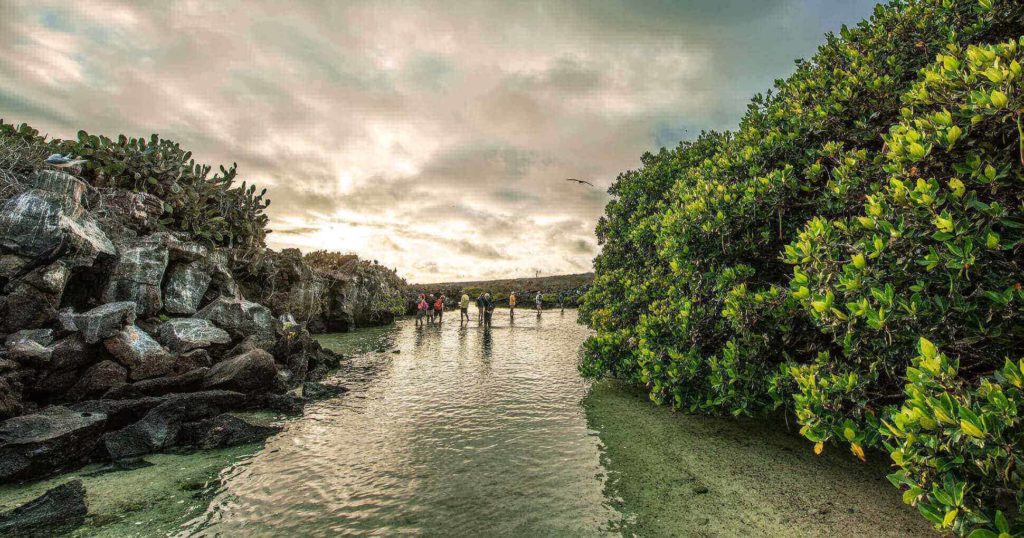 Darwin Bay is surrounded by cliffs. Here you can also spot many of Galapagos iconic birds

There is much more to see while hiking the Darwin Bay trail than birds. Lava flows here are interesting because it is evident that there hasn’t been much volcanic activity in recent years, but some flows may well be only about 5,000 years old. If the water is your world too, then snorkeling along the cliffs will bring awesome encounters, and the unusual hammerhead sharks may come in for a quick view. At one end of the bay, sea lions often enjoy resting in the sun on a white-sand beach. When walking on a path through a mangrove forest, you can see many other species of birds that nest there. You will also be able to explore many fascinating tidal pools at certain times of the day.

The Best Way to See It All

There are many ways to see the wildlife, plants, and gorgeous scenery of the Galapagos Islands National Park, but the best by far is on an expedition cruise. It provides excellent accommodation as well as naturalist guides, and you do not have to worry about hotels. These cruises are eco-friendly and always aware of their impact on the environment. The Galapagos Islands cover a huge expanse of land, and if you need to travel to each island, you may spend more time on the water than on land. Your cruise will travel the miles at night, so you spend more daylight hours visiting all the fascinating places. Cruises also offer fun and educational activities for adults and children.

If you would like to visit the Galapagos Islands to experience the amazing flora and fauna, you may want to consider an expedition cruise. Because of the careful care given by Ecuador, you can see these islands in an absolute pristine stage, just as they did centuries ago.