Red-footed Boobies in Galapagos – the most unusual booby species 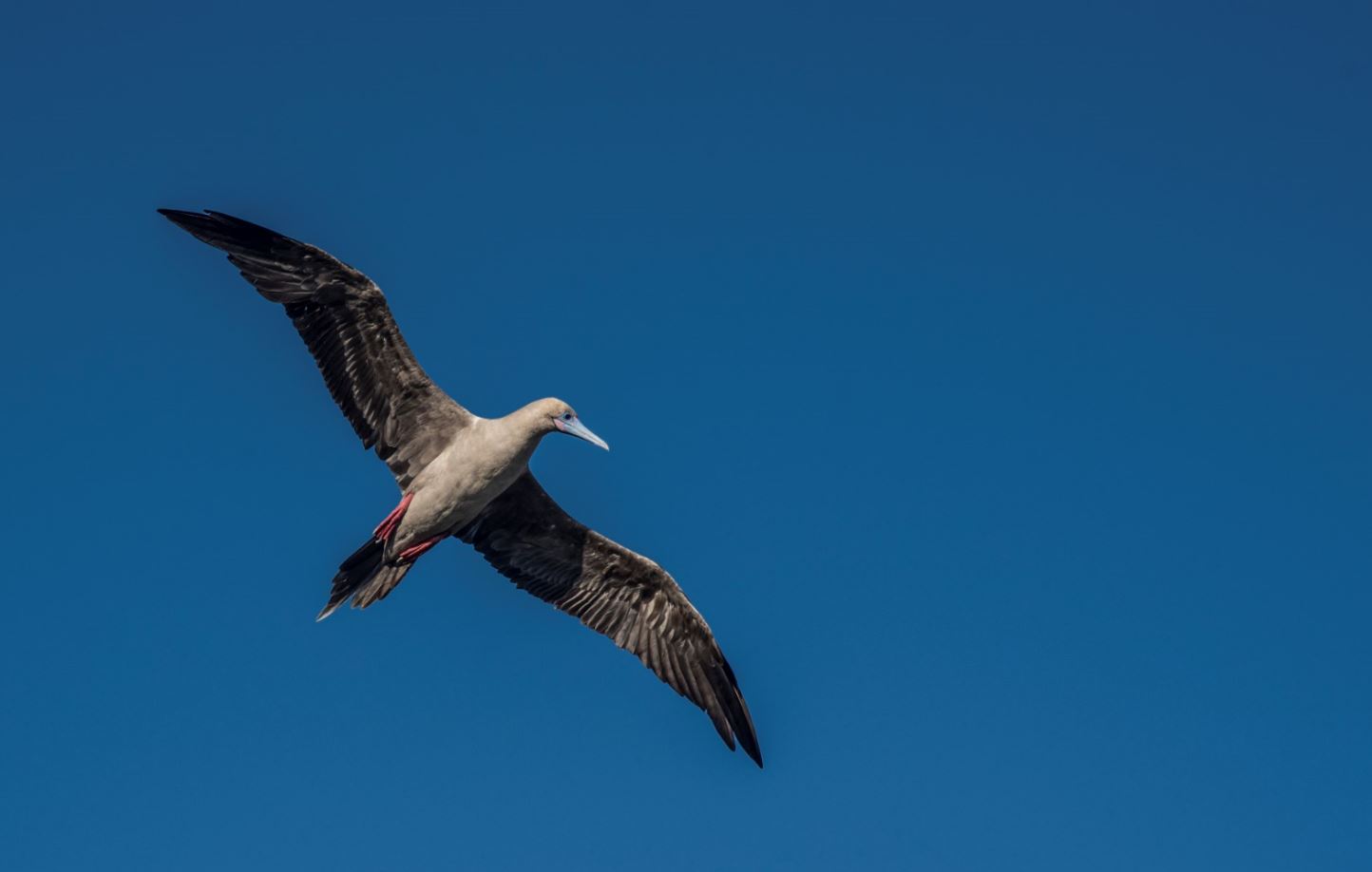 Red-footed boobies in Galapagos, like their blue-footed amigos, are endowed with a rather clownish appearance thanks to their large, bright red feet and stunning blue beak. However, what in the world is a webbed bird doing on branches and trees? It makes sense why crows, ravens, robins, and most birds have powerful digits to grab onto branches, but web is really odd and that fact is one more oddity to witness in the islands. 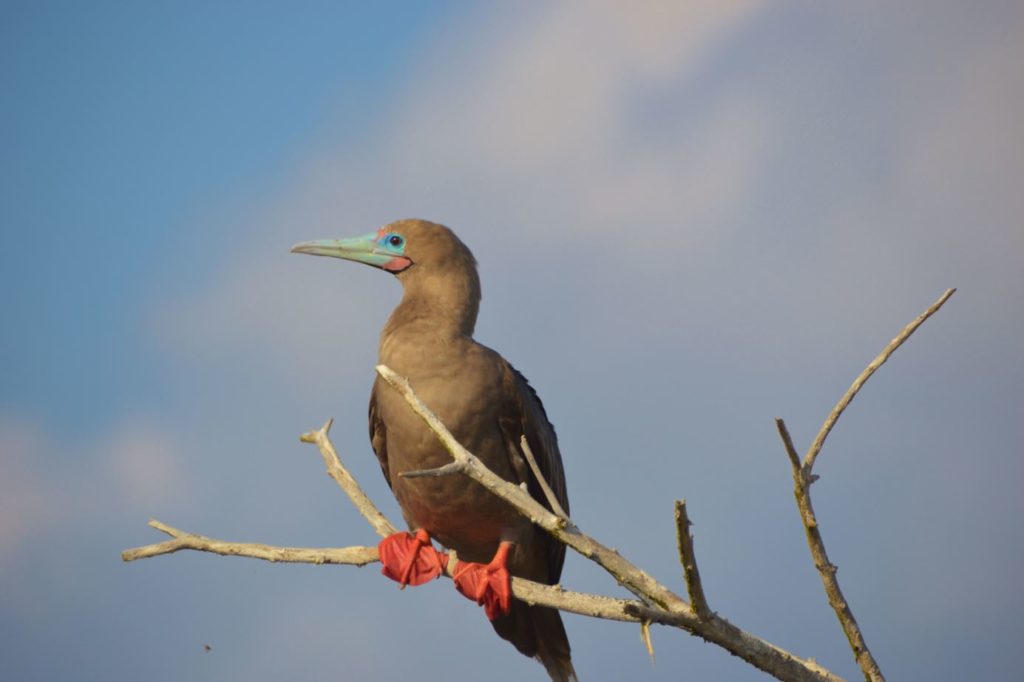 Red-footed boobies can be spotted at Genovesa, San Cristobal and some can also be seen at Punta Pitt

They are considered to be one of the most polymorphic seabirds, and while three plumage types are typically recognized (white, white-tailed brown, brown), there are several shades of color between them.

Only two of these morphologies are recognized in the Galapagos Islands, with the brown plumage being far more common. Although this plumage color variation has been studied in a variety of contexts such as sexual selection and speciation, experts are still not certain why it exists or how natural selection benefits individuals of this species.

Genovesa Island is the best place in the Galapagos to observe these colorful birds, as it is home to what is most likely the largest colony of red-footed boobies in the world. Cruises like Santa Cruz Cruise offer the opportunity to view these magnificent birds in their itinerary, so think about what you want to see before choosing your Galapagos expedition vessel. However, the red-footed booby spends the majority of its time at sea, the only place the skills of these birds can truly be appreciated. Dozens of miles before reaching the island you will see these red foots flying around and some even daring to use the riggings and railings of a ship as landing places. When feeding out in the open ocean, they dive through the air, and what appears to be clownish movements on land transform into an image of power and grace thanks to their aerodynamic, streamlined body. They typically fish by plunge-diving, but are nimble enough to snatch flying fish from the air. They are also incredible swimmers; once they have hit the water, they can dive up to 30 meters in pursuit of their catch. Furthermore, red-footed boobies in Galapagos are able to close their nostrils to avoid water from entering their respiratory tract.

Red-footed boobies are very strong flyers and are known to travel up to 93 miles in search of food; however, despite their relatively small size, taking off is a difficult task. Thus, scholars use the term pelagic when refering to birds that fly very far away from where they live (from the greek pelagos, meaning oceanic going). They rely heavily on the wind to take off, and without its help they struggle to get into the air, partly running and partly flying until they gather enough momentum. When taking off from the water, they use the weight of the water to thrust upwards, and then jump into the wind.

Red-footed boobies are extremely gregarious and often feed in large groups. Cruise passengers may see them flying together over the ocean or gliding just above the surface, carefully eyeing out their next feast. They are also frequently observed feeding in association with other predators, such as dolphins. The dolphins herd the prey toward the surface, where the boobies can then snatch it up.

Mating & Nesting – it all happens up there

In line with their gregarious nature, red-footed boobies gather in enormous colonies during the mating season, and mates often stay together for several seasons. As with other booby birds, the mating season begins with elaborate greeting rituals. The male will perform a dance known as ‘sky pointing’ in which he throws back his head, showing off his brilliant blue throat. They also lift up their feet and wave them in the air, displaying the bright color. These dances are performed on branches around the nest, which unlike other booby birds, are built-in small trees and shrubs. This is a true act of balancing art! 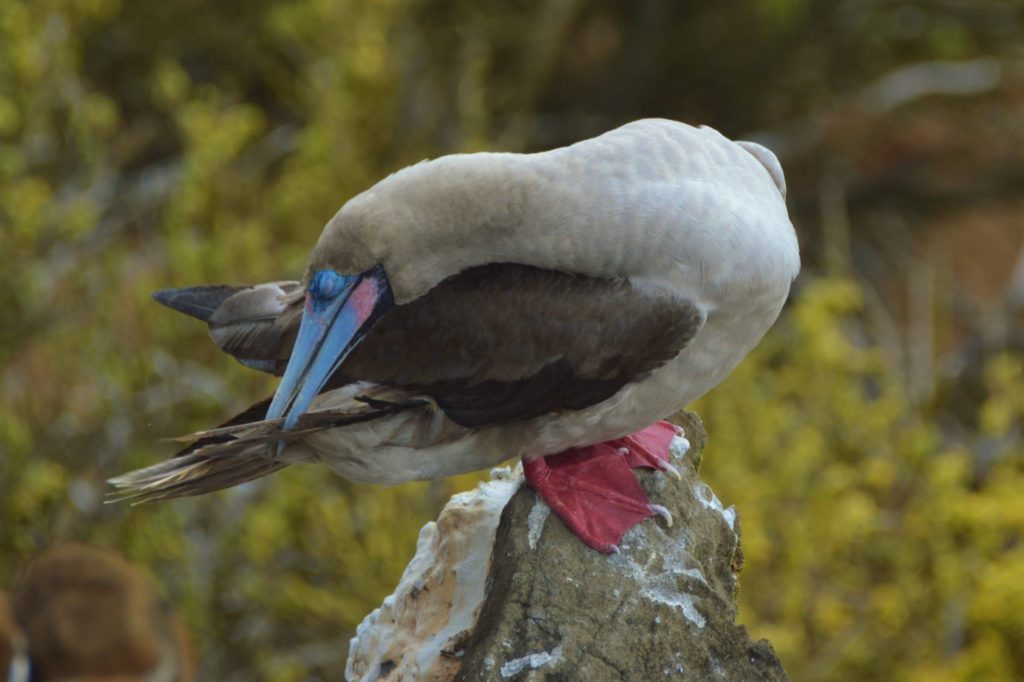 During its mating rituals, red-footed boobies show off their necks in order to attract females

Red Footed Booby birds are often known for their rather harrowing displays of siblicide; however, interestingly, red-footed females only lay one egg, saving the birds from this selective pressure. Male and female take care of the chick as it matures quite slowly; chicks do not fledge until they are about three months old and all look like a cotton ball. They will turn all brown around 5 months and here they are strong enough to go on extended flights. During this time, they will often have to go long periods of time without food while their parents fly out to the open ocean to fish. As red-footed boobies only breed approximately every 15 months, they have a relatively low production rate; however, this is balanced by their long lifespan, extending over 20 years. The oldest known individual lived to be 23 years old.