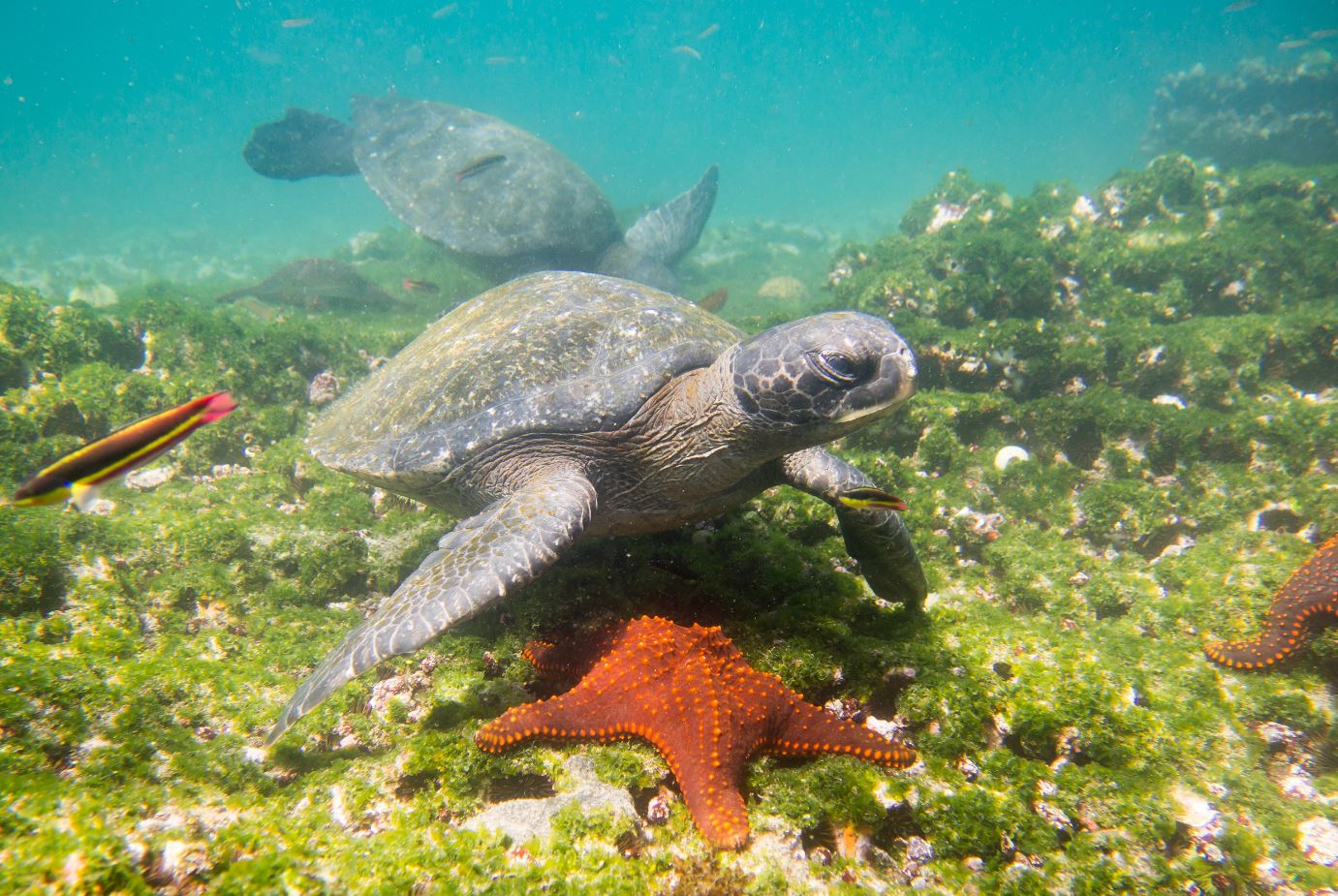 I had the opportunity to snorkel with some sea turtles once. It was around 4 years ago and I just remember feeling a bit startled by their laid-back nature and tranquillity. This time, however, the experience felt exponentially more exciting aboard the Santa Cruz II. Perhaps it was the expectation that they triggered inside me with their briefing the night before, or perhaps I just couldn’t imagine just how close we’d get to the Galapagos wildlife and just how big their numbers would be when we did. Right before hopping into the dinghy with our Frigates group I heard the Santa Cruz II official photographer say, “they call this place Sea Turtle City”.

I have to recap here a little bit. This was just the second day in the Galapagos in the Western Islands Itinerary. We had arrived to Baltra’s airport the day before and had gone on our first excursion to North Seymour Island that afternoon. The fact that we were greeted by very large colonies of nesting blue-footed boobies and frigates all of us by. We watched as, under their warm feathers, they sheltered their fluffy chicks. Following a wonderful dinner on the boat that was hosted by the chef himself, we all walked our bellies to bed that evening exhausted yet excited for what awaited us the next morning. That evening, while we slept, the ship began sailing to Isabela.

Frigate showing off its pouch in North Seymour

That morning I woke up a little before before breakfast and decided to go for a run on the treadmill upstairs at the boat’s gym. We were still sailing, but I could already see the shores of Isabela right in front of us. Isabela is the biggest of the islands in the archipelago, so its shores go on for many miles. I have to say that, just from the treadmill looking out, the view was a sight to behold. The first hints of sun were starting to paint the sea and the island. The way the light was cut by the morning clouds made for a perfect Caravaggio inspiration. I was so hypnotized I had to stop the treadmill, go outside to the Sky Deck, and take a photo. It felt like we were the first humans to ever set our eyes on this place and its beauty was too haunting to describe.

Back in the dinghy, each group was led by its naturalist guide. We were reminded about the Galapagos National Park rules and other important safety tips that would make our activity more enjoyable. Promptly, we were dropped in the most amazing of places, Punta Vicente Roca, right next to a huge natural cave and a little bay where we would swim with the current and later get picked up by the dingies on the other side. Our guide, Fatima, gave us a little biodegradable shampoo to wash our googles with so that they wouldn’t fog up. Everyone was already wearing their wetsuit, water cameras in hand, and one-by-one we all jumped off the dinghy with our backs towards the sea.

No one was really ready for what was waiting for us in the water. Sea turtles were everywhere! Probably over thirty of them were calmly swimming and grazing and prying on bits of algae on the rocks with their powerful beaks. It was like standing in the middle of a street and having cars move past you trying not to hit you. Of course, the speed of the turtles was nothing compared to that of a car, even though they can be really fast underwater. Yet, during their lunch hour and with no other activity scheduled, they were in no hurry. It’s a good thing that the Santa Cruz’s itinerary is planned in such a way that it can have most of these magnificent visitor sites to itself, because we had Sea Turtle City to ourselves that day. That way all of us had the chance to observe them in their wildest, freest state, and they didn’t seem to be bothered by our presence at all.

In fact, I swam back up to the surface for some air and was chatting with a friend about how amazing everything was, when I suddenly hit another guest with my elbow. My apology didn’t seem to affect what was actually a sea turtle swimming by. I had nothing left to do but truly apologize again! I felt so bad for accidentally hitting the sea turtle! She just kept swimming as if nothing had happened.

Sea Turtles All Day, Every Day!

We were in the water for about an hour but it felt like five minutes. Swimming with so many sea turtles and having them swim next to us is something that goes beyond words. I remember trying to hold my breath underwater for as long as I could so that I could just get a little more time with these creatures. There was such a feeling of peace while I was underwater with them and it was unlike anything one typically felt on land or back in the actual city. I would have stayed longer with them if I could. Luckily my wish did come true. We actually got the chance to snorkel with sea turtles throughout the rest of our days aboard the Santa Cruz II. I couldn’t have asked for more. Yet I did get more! On top of the otherwordly landscapes and fearless wildlife, I was pleasantly surprised by the flawless service aboard the Santa Cruz II. With the amazing food, the delicious cocktails that accompanied the most perfect of sunsets, and the super comfy bed… it was truly a transformative experience. The only bad thing? It just leaves you wanting more.