The Only Equatorial Tropical Penguin 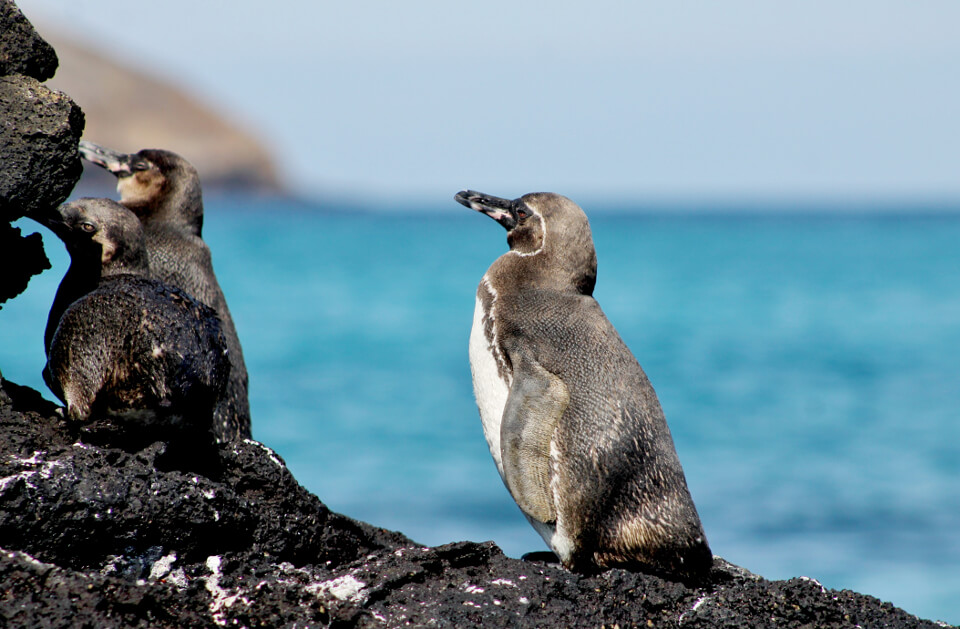 Of all the wonders in the Galapagos Islands, one of the most spectacular is that this equatorial archipelago, with its tropical forests, barren deserts, and temperatures reaching up to 38°C (100°F), is able to support a species of Equatorial tropical penguin. Penguins can be found in several locations, but the Galapagos penguin is the only species that lives so far north- and even more miraculously, right on the equator. The story seems like a natural history fairy tale.

Equatorial tropical penguins are built for cold climates- the farther south you travel, the bigger they get in both individual size and population size with the mighty Emperor Penguin down in Antarctica surviving temperatures as low as −40°C (−40°F). As such, the Galapagos penguin has a range of specific physical and behavioral adaptions that allow it to survive in such warm temperatures.

But, how can it live here in the tropics?

Several adaptations enable this penguin species to survive here at equatorial latitudes. The Equatorial tropical penguin is the third smallest in the world, a vital adaptation to surviving in the warm Galapagos climate. Its small size – no more than 20 inches in height – allows it to squeeze into small caves and crevasses to hide from the strong sun. Furthermore, the populations do not require as much space as larger penguins, which is particularly important in the Galapagos where the Galapagos penguin has the smallest breeding range of any penguin species. Furthermore, their smaller size requires smaller amounts of food, increasing the Penguins’ chance of survival during times of scarcity. 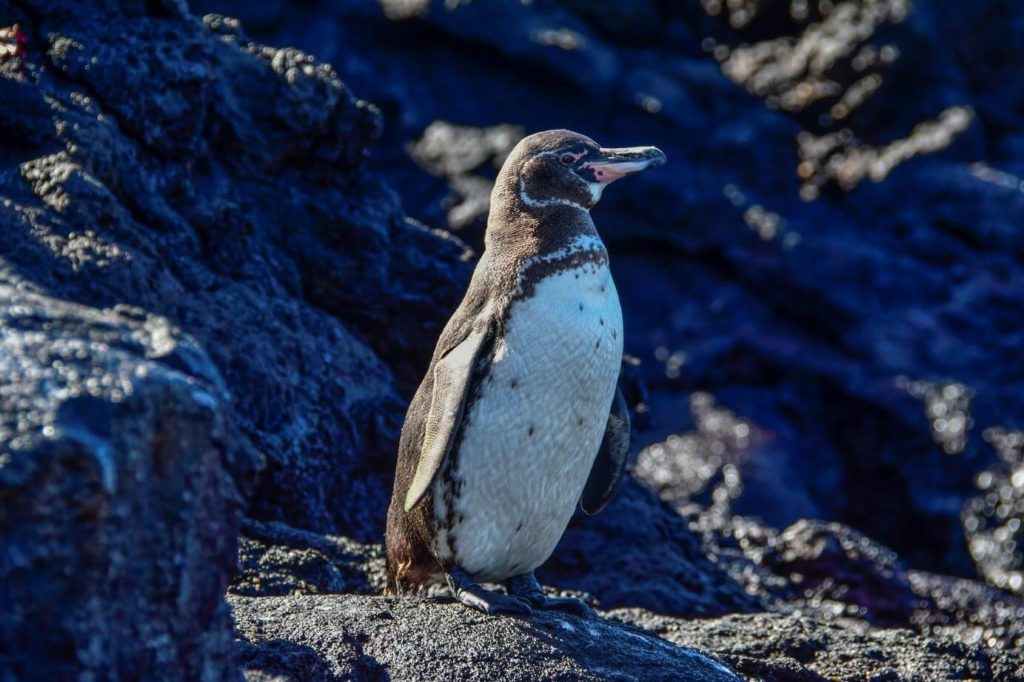 The Galapagos penguin is the only penguin north of the Equator

The Penguins also have a few techniques to protect themselves from the hot equatorial sun. They can frequently be seen holding their flippers away from their body to release heat through the exposed underparts of their flippers or, on the other hand, using their flippers to shade their delicate feet. Heat is further dispensed by increased blood flow to these exposed areas. Additionally, Galapagos penguins pant much like dogs do, as a way to release heat by evaporation from the throat and airways. However, their best technique to stay cool is simply taking a swim. Like all penguins, they spend the majority of their time in the water, which is cooled by the Humboldt Current and oceanic upwelling.

The Cool Side of Galapagos – The Humboldt Current

Experts believe that the ancestor of the Equatorial tropical penguin arrived at the islands via the Humboldt Current, and this current continues to play a vital role in the Penguins’ lives. The Galapagos penguin primarily feeds on krill and small crustaceans, along with larger organisms such as fish and squid, but the presence of this food is directly related to the presence of the Humboldt Current. The Humboldt Current carries cold Antarctic water northwards along the western coast of South America, also displacing surface water and allowing deep, nutrient-rich waters to upwelling to the surface, creating one of the most productive marine ecosystems in the world. This current and the nutrients it brings to the islands are vital for the Penguins’ survival. Indeed, their distribution throughout the archipelago correlates directly to the current’s flow. Over 80% of the population inhabits the western islands of Fernandina and Isabela (the remaining penguins live on the Bartolome, Santiago, Santa Cruz, and Floreana islands), which are strongly influenced by upwelling processes and the Humboldt Current. 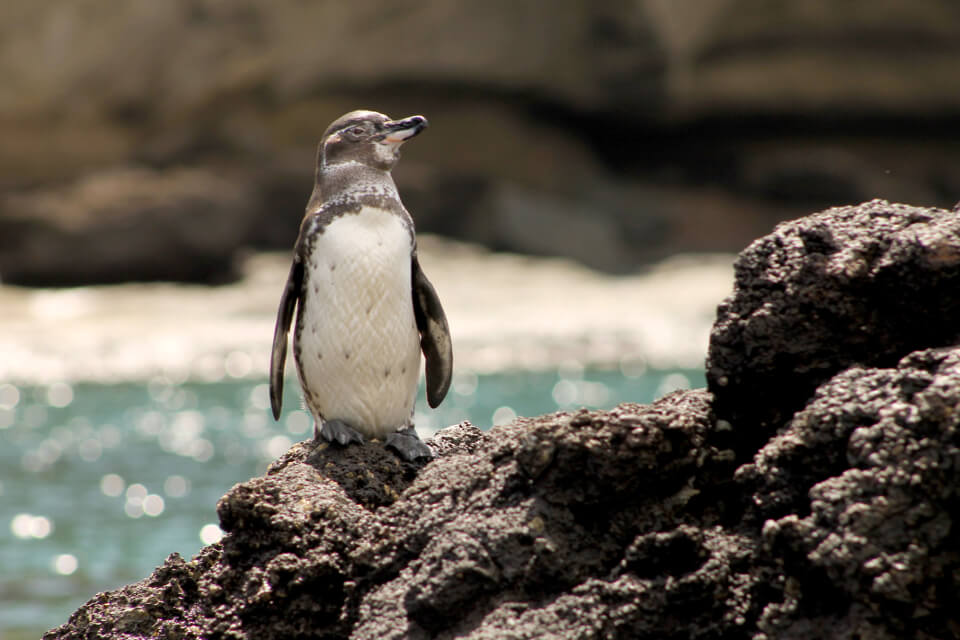 The Galapagos penguin, like many other types of penguins, mates for life.

Not Everything is Picture Perfect for Penguins

Like many species in the Galapagos Islands, the penguin population has suffered greatly in recent decades due to climate change. The Galapagos penguin is the rarest and most endangered penguin species in the world and has been having trouble adapting to the increasingly drastic climate changes in their environment. Events as Super El Niño have become increasingly common over recent decades, drastically affecting their supply of food during such periods. During the 1982-1983 El Niño, approximately 77% of the population died and, just 15 years later, the population decreased an additional 66% as a result of the 1997-98 El Niño. However, these significant losses in population further affect the penguin by decreasing the population’s genetic diversity, thus indirectly hindering its ability to adapt to future problems such as disease. This, combined with their highly restricted breeding ground has made the Galapagos penguin extremely vulnerable. A significant number of the nests that the penguins used 40 years ago have since been destroyed, are used by iguanas or are flooded. Conservation efforts have been undertaken to increase their numbers, such as through the construction of artificial nests to increase reproductive success. The penguin’s numbers have slowly been increasing in recent years, but the population remains very fragile, with just 1,000 individuals in 2007. However, the impact of introduced species can be more harmful than all these natural factors combined. The volcanic shores of the islands virtually have no escape routes on land, at least for penguins, and therefore the only two options of escaping are to head rapidly in the water, which chicks and juveniles won’t handle well at all, or find small cracks in the rocks or empty lava tubes to hide.

Nothing Tops Snorkeling with an Equatorial tropical Penguin

Spend a wonderful day snorkeling along with the iconic Galapagos penguin!

Of all wildlife encounters in Galapagos, perhaps finding penguins on land and in the water is one the most unique experiences for explorers. The reason is rather simple: where else can you snorkel with a penguin right in tropical latitudes? It seems quite odd, for example, to look at the underwater world of Galapagos and see a parrotfish, a true tropical fish species, and then a penguin swimming torpedo-like next to you. This is like watching a polar bear on a tropical beach. Snorkeling with penguins is a true “only here” wildlife experience, and luckily several expedition itineraries offer the possibility of accomplishing this. Popular visitors sites for penguins include Punta Vicente Roca, Bartolome, Chinese Hat, Floreana, Punta Espinoza. 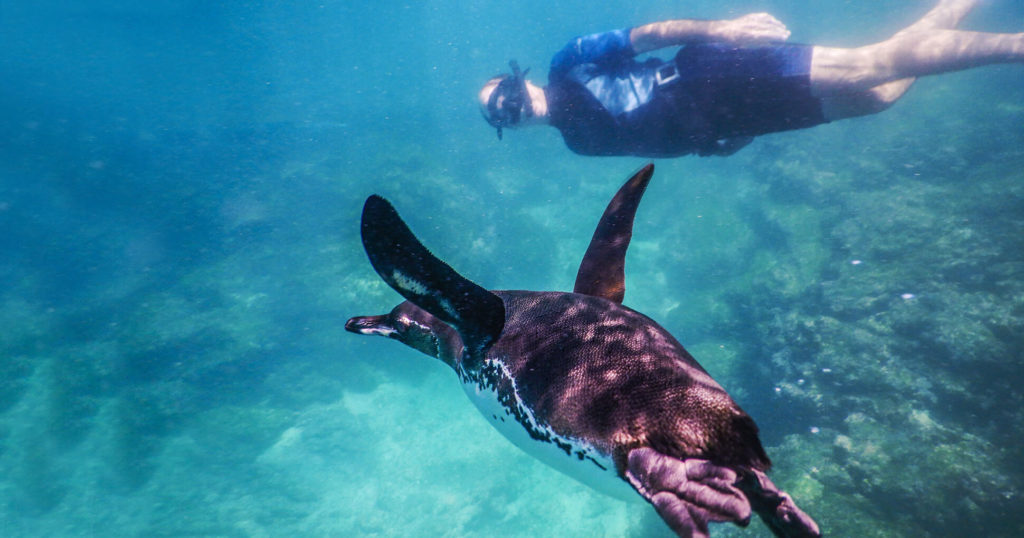 Snorkeling is a great way to get a close-up of the Galapagos Islands’ iconic marine life.