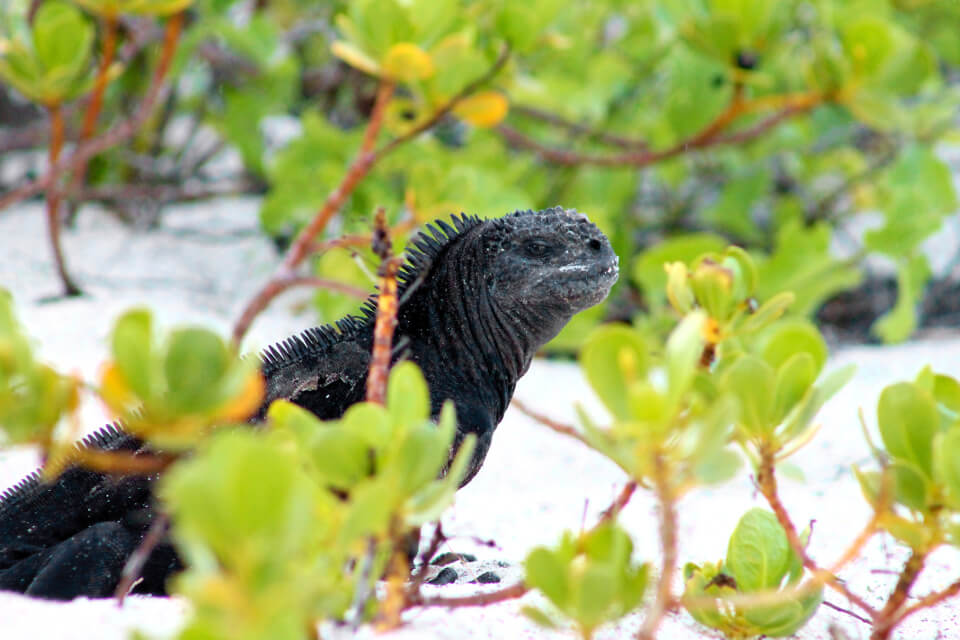 Marine iguanas in Galapagos – they amass in massive groups of greyish-black clusters atop the lava rocks that are ubiquitous throughout the islands. Atop this smorgasbord of scales come little spritzes and streams of water, ejecting themselves out of the noses of these dinosaur-like creatures. They have a face and form which, from Darwin’s perspective, are features that only a mother could love; but true beauty, in the Galapagos at least, comes in the form of the marvelous adaptations that these creatures have acquired over the millions of years that they’ve been around here. It’s one of the reasons that marine iguanas in Galapagos have earned their place in our BIG15 group of iconic species.

Scientists believe that the ancestor of the present-day marine iguana (that guests are able to walk alongside) arrived in the archipelago many millions of years ago. Theories abound of how these ancestors possibly drifted to the islands aboard driftwood or debris from the mainland that were pushed out and carried by the strong ocean currents. Since then, marine iguanas in Galapagos have managed to spread out across the numerous islands that exist in the archipelago, diversifying and populating the vast number of beautiful beaches that they are home to. Consequently, their spreading also led to small little distinctions in their appearance, sometimes even creating spectacular changes in color, too. Most notably: greener iguanas are found on Santiago Island while redder iguanas are often found on Española. 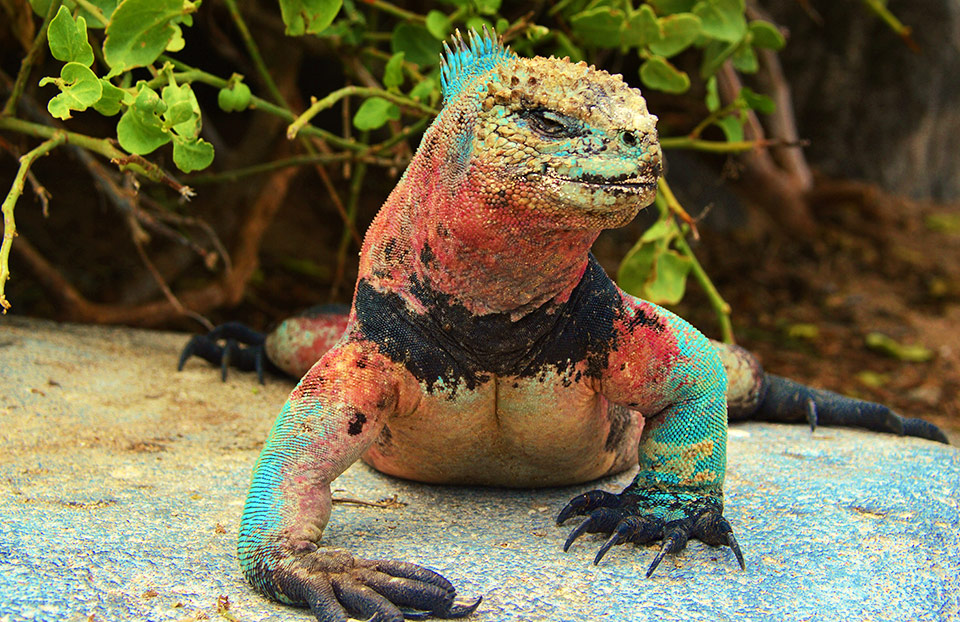 The Christmas iguana is an example of how unique the Galapagos are. Discover it through our Eastern Galapagos Itinerary.

The easiest way of distinguishing a marine iguana is by checking out their tail – usually laterally flattened – and their relatively flat, almost square snout. The difference between gender usually has to do with their coloring, with males typically retaining a brighter shade and larger body size. 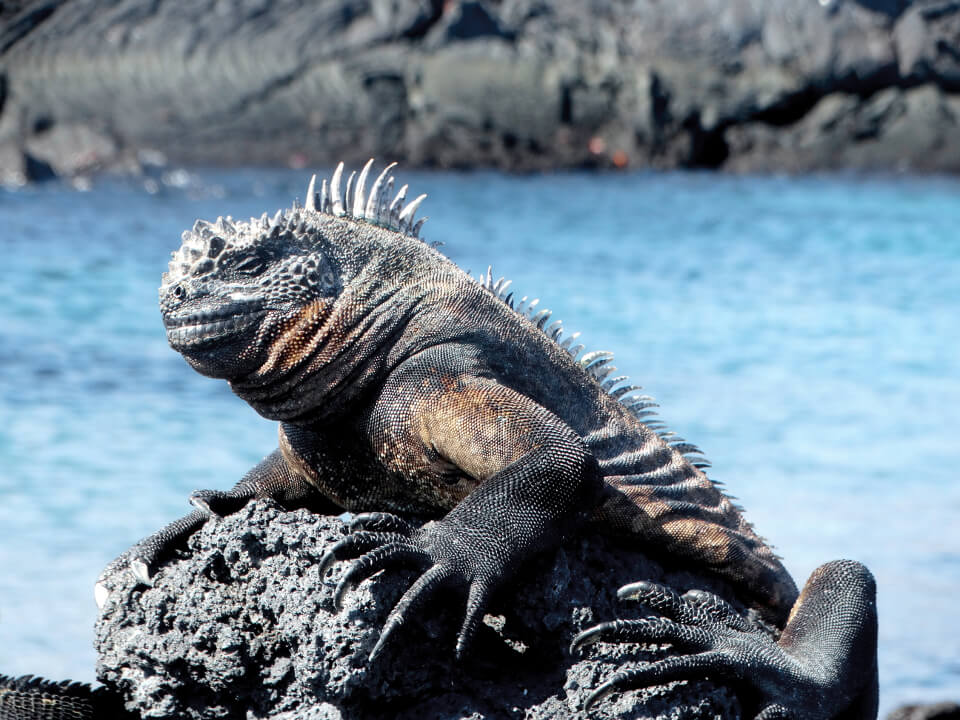 The marine iguana is part of our BIG15 Galapagos iconic species.

It is believed that marine iguanas in Galapagos diverged from their ancestor some 5.7 million years ago, which make its distinctive traits mentioned above some of the things that separate them from their land-dwelling cousins. Said traits are present in order to allow marine iguanas in Galapagos to better deal with its “newish” environment, turning these traits into features that benefit their swimming skills more than anything else. Their unique, flattened tail, for example, helps them to steer their bodies underwater and dive to the ocean floor to feed on the algae that makes up a substantial part of their diet. Their square noses and razor teeth have given them the ability to get their mouths that much closer to the tenacious algae that stick to the underwater volcanic rock, allowing them to pull it off with greater force. Longer claws, even, have given them the ability to cling to underwater rocks in the face of powerful currents. 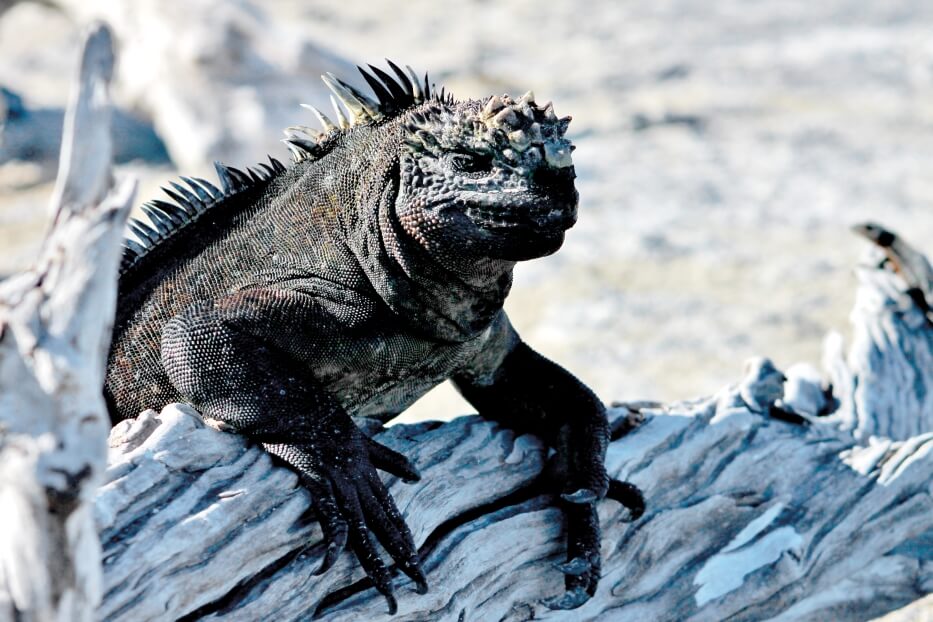 The marine iguanas have to raise their body temperatures up to 36°C, as they lose 10°C of heat when underwater.

As cold-blooded creatures, marine iguanas in Galapagos have also evolved another fascinating way of dealing with the absence of thermoregulation in their bodies. The way they do this is by “charging up” under the warmth of the sun before heading underwater (they typically have to raise their body temperatures up to 36°C, as they often lose 10°C of heat when underwater) and then once again repeat the process after feeding. Another fascinating adaptation to their diet and underwater behavior is the way they get rid of the high levels of salt that their bodies still haven’t gotten used to. The saying – better out than in –  is exactly what they do with that surplus of salt, and it comes out through special glands that are a part of their nostrils, giving them that somewhat grotesque tendency to “sneeze” or seemingly “spit” out the salt from their blood through their nose holes.

If you are curious about this species and are wondering when you will be able to see it on your Galapagos expedition, don’t worry: this unique and amazing species can be seen on all our Galapagos itineraries! 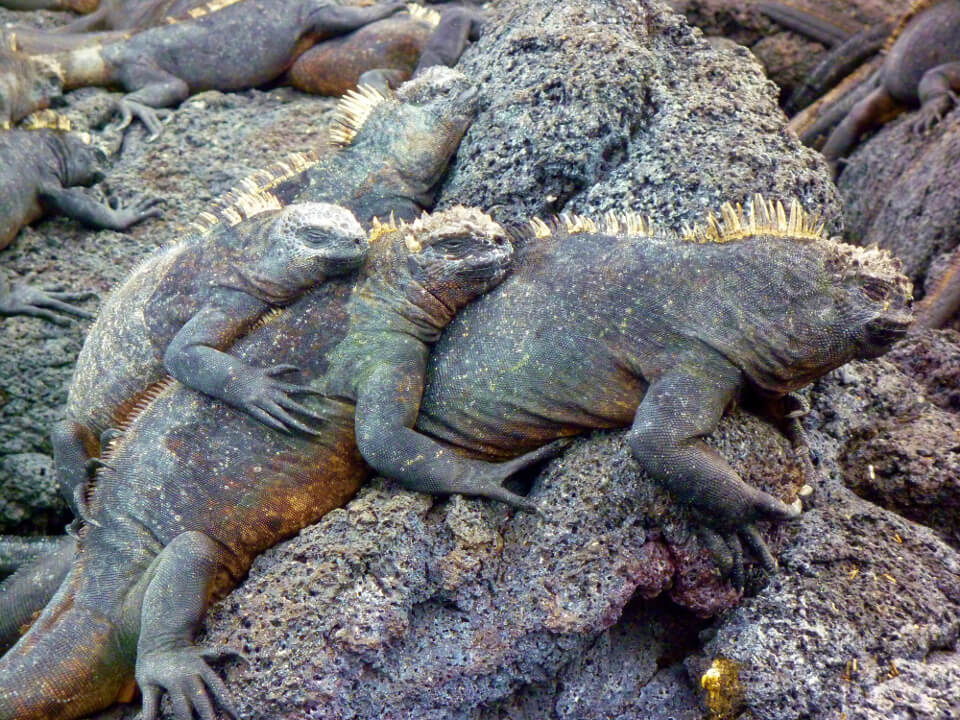 Explore the Galapagos and discover these dinosaur-like creatures.